Is the war in Ukraine the latest threat to tourism?

After two tough years, with minimal tourism activity worldwide and the struggles of tour and travel companies and communities to survive, 2022 looked like the rebounding year for the industry. Nonetheless, the unexpected Russia-Ukraine war is abruptly halting the sector’s recovery.

The conflict is in an early stage, and it’s hard to forecast how the war may impact tourism in the mid-long term. However, we conducted an online survey among our partners to get a better overview of the current situation in the industry worldwide. Then, we also evaluate the scenarios by analyzing the impacts on the economy, travel safety, and travel sentiment.

The summer looks suffocating for tourism recovery, and not due to the weather

The first effect of the war will be the impact of the summer season in some European, Asian, and Middle Eastern countries that relied on Russian visitors. According to Mabrian Technologies, a travel intelligence platform, Turkey and Greece are the most dependent countries on Russia’s travelers. However, Spain, Italy, the UAE, and Thailand have an important influx of people from the largest country in the world. The same happens in some Latin American countries, such as Mexico, Cuba, the Dominican Republic, and Venezuela, due to the ban on Russian airlines to fly over the EU and Canada airspace.

Carlos Cendra, Sales & Marketing Director of Mabrian, stated that “it is possible that these countries (…) will have to increase their efforts to attract tourists from other markets, demonstrate greater competition and lower prices to counteract a possible decrease in tourism from Russia.”

On the other hand, tour operators must stop operations in Russian destinations, a growing emerging tourism market. That’s the case of the global tour operator G Adventures which canceled a dozen trips involving Russia, including the highly demanded trans-Siberian train trip.

Cruise lines had to move the helm and quickly change the stops on Russian port routes. For example, Princess Cruise Line modified 24 itineraries that initially visited St. Petersburg. The cruise industry’s strategy is to increase days in European destinations such as Copenhagen and Stockholm, as Oceania Cruises did.

The skyrocketing fuel price is another threat that heats the summer season worldwide. According to Santosh Sharma, Leader of the Foreign and Security Affairs in the Nepal Institute for Policy Research:

“The political and economic implications of the war have just started to manifest themselves, and it may take us a long time to realize the actual damage cost of the conflict. It has, nonetheless, led to an increase in global oil prices and led to a disruption (shortage) in global food production and supply chains. It will lead to an increase in flight prices and the cost of travel.”

Airlines worldwide had to diverse their flight routes to avoid passing over the Russian, Ukrainian, and Belarussian airspace. Thus, there are no flights or code sharing between American and Russian Airlines. Also, American commercial carriers reduced or stopped their connectivity to Asia. For example, United Airlines left only the routes to Delhi from Chicago and Newark.

Summed to the increase in fuel prices, the forced diversion of flights also affects airlines’ operation costs, passing to travelers with costly tickets. In the opinion of Robert Mann, an airline consultant referred by The New York Times, rerouting a flight to Asia from the US may cost an airline $12,000 per extra hour of flight time to avoid Russian airspace.

Is air travel still safe in times of war?

Humanity, unfortunately, has seen many wars in the contemporary era. However, the war in Ukraine, forced by Russia, implies a nuclear threat to the world. Therefore, one of the main questions that all of us may be asking is if it is still safe to fly during this conflict.

Preetam Mohanty, Business Strategy, Social, and Tourism Expert, explained that “the security threat to air travel during times of war cannot be taken lightly.” Indeed, Mohanty recommends that the best strategy to mitigate flying fears due to the war is by declaring safe air travel routes. Hence, the civil aviation sector would ally with countries to define, coordinate, and proclaim safe air routes near Asia and Russian airspace.

Is the war blowing down people’s desire to travel in 2022?

Apparently, humanity is ready to live and embrace uncertainty after living long periods of lockdown, suffering anxiety, and realizing what’s important in life. Also, after being away from our beloved ones and discovering how life has passed without accomplishing our dreams. Hence, due to covid, people and tour companies are more flexible with travel plans even though the conflict. Still, they monitor what is happening to check if the trip is affected.

MMGY Global conducted a survey on American travelers, finding that 47% of respondents are waiting to see the evolution of the Ukrainian war before arranging their trip to Europe. 62% are concerned about the spreading to nearby countries in Europe that may affect their European journey. On the other hand, 50% are worried about possible delays, cancelations of transportation, and border closure.

Moreover, we found out in our survey among 64 international travel companies and experts from the US, the UK, Germany, and Australasia countries that 9.1% of travelers canceled their trip; 18.2% have seen a decrease in sales after the conflict, and 27.3% of their journeys have rescheduled. Yet, 45.5% of our partners haven’t seen any change in their sales due to the war. 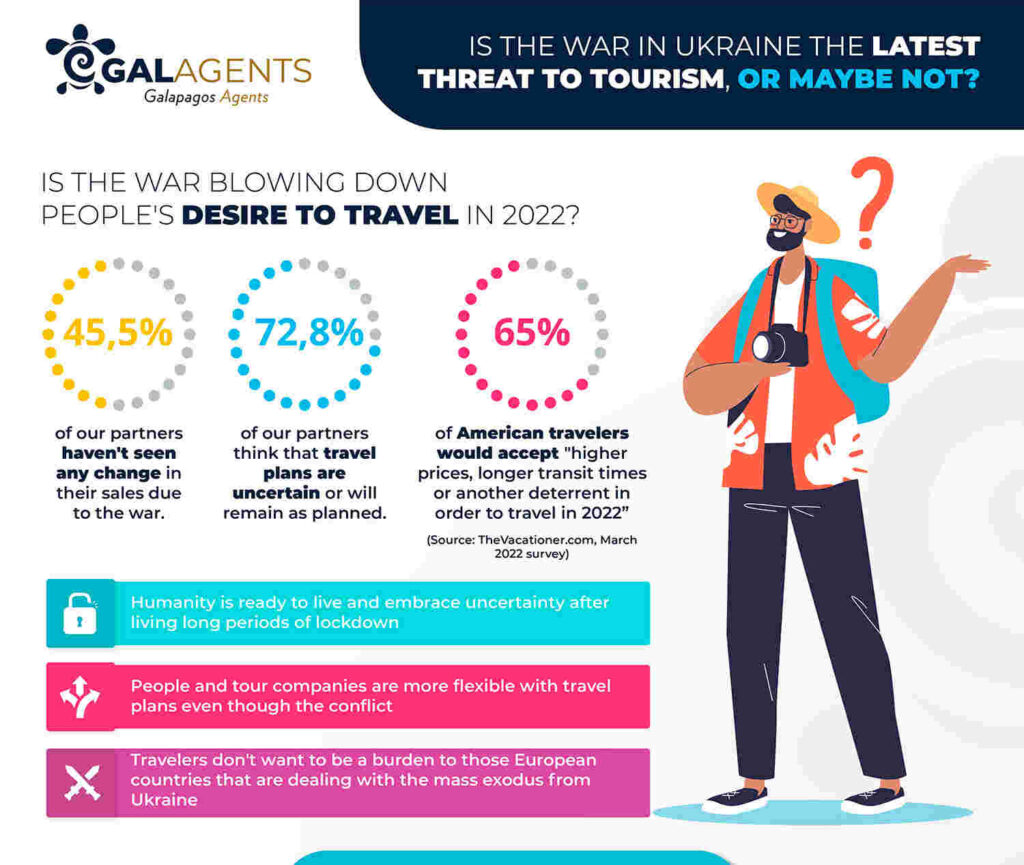 Regarding how they think travel plans may be affected by the war, there’s a tight between uncertain and remaining as planned, with 36.4% each. 18.2% believe that people will postpone their trip, and 9.1% expect a decrease in their sales.

“In regular times, clients would have said, ‘I’m not going to travel,’ but people have gone two years not traveling (…) ‘There’s a push and pull thing going on.”

Travelers don’t want to wait to live their dream trips to remote destinations. Indeed, the NYT found out that some tour operators have increased their sales. People are turning their attention to other destinations like the Caucasus, Central Asia, and the Middle East.

In fact, TheVacationer.com, a travel strategy website, conducted another survey in the US, finding out that 65% of travelers would accept “higher prices, longer transit times or another deterrent in order to travel in 2022.” Instead, 40% of respondents said the war made them reconsider their domestic or international travel plans in 2022.

What travelers are aware of is their impact on Eastern European countries during the war. They would like to support local economies and interact with the cultures during their trip. Still, they don’t want to be a burden to those countries that are dealing with the mass exodus from Ukraine.

As tourism businesses, how can we deal with this conflict?

The best we can do is to remind travelers of the flexibility of our cancellation and rebooking policies. To address any travelers’ hesitancy, we need to draw a clear path for them if they need to cancel or reschedule their trip. They need to feel confident in booking because they’ve seen that COVID-19 brought flexibility to the industry. 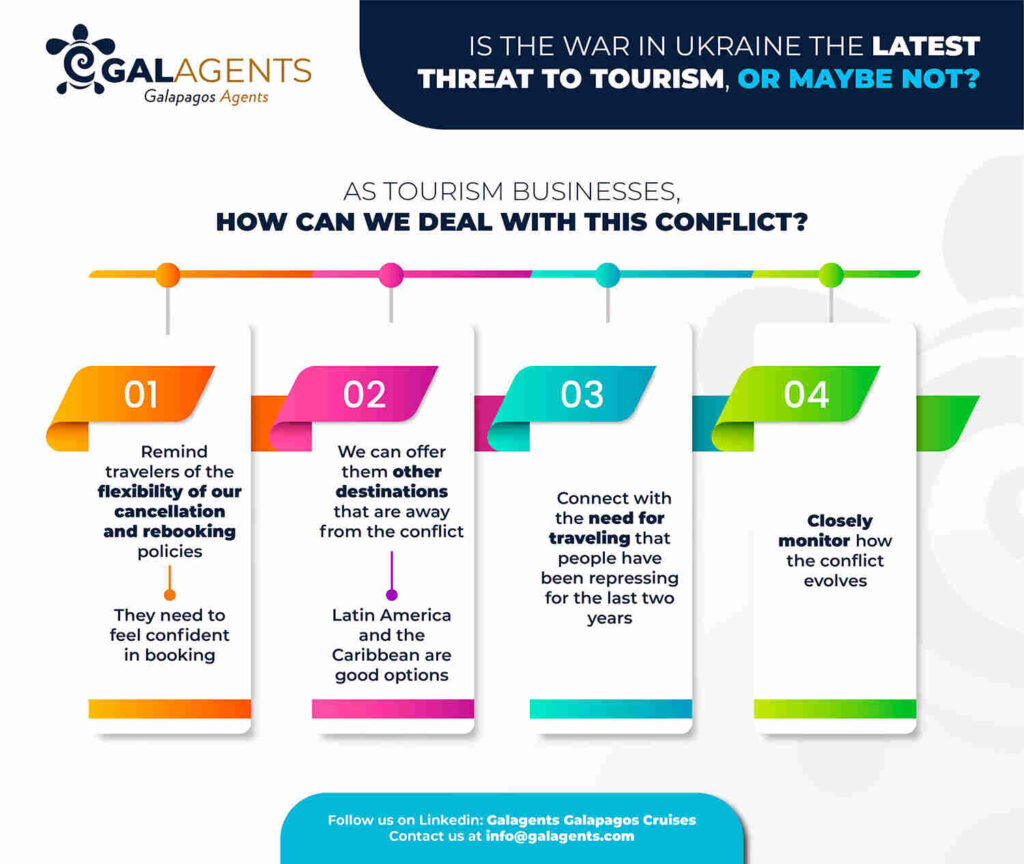 Also, we can offer them other destinations that are away from the conflict, such as Latin America and the Caribbean. Highlighting the benefits their travel will bring to the tourism reactivation of these destinations. We can also connect with the need for traveling that people have been repressing for the last two years. Meanwhile, we can closely monitor how the conflict evolves and hopefully with a sooner and more peaceful resolution.