Toucans, tanagers, hummingbirds, parakeets, finches, and many more bird species are part of Ecuador’s richness. Surprisingly, this small country in the middle of the world, with an equivalent size to Colorado states in the US and a bit bigger than Great Britain, is home to around 10% of the world´s bird species.

Colombia and Peru are also important birdwatching destinations worldwide. However, they are massive compared to Ecuador, where moving within the country is easy and quick.

Not in vain, Ecuador will host the XII South American Bird Fest in 2023. An event that looks to enchant and engage worldwide birdwatchers to come and discover unique bird species. Hence, let’s talk about some facts that make Ecuador an unmissable destination for avid birdwatchers.

Ecuador: a small country but big in biodiversity 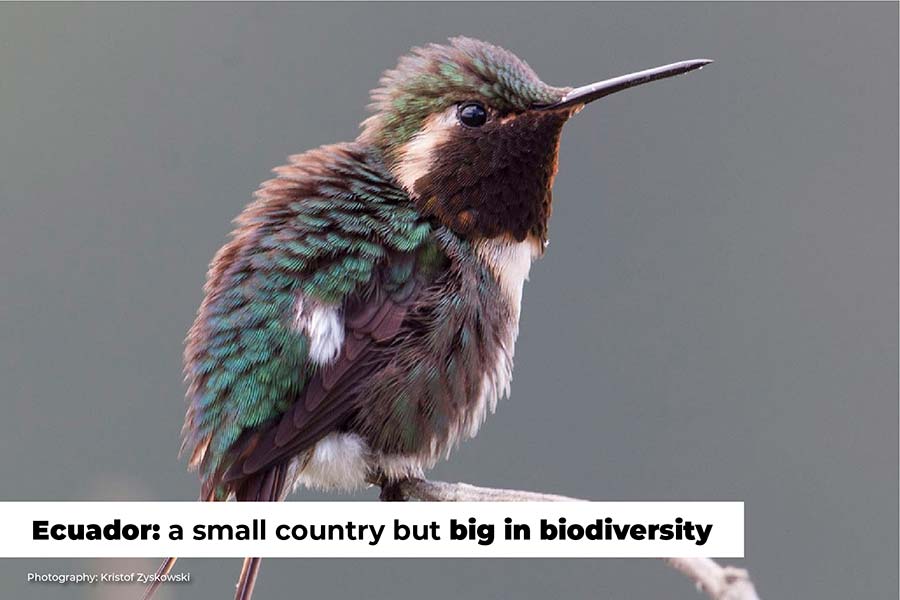 As we mentioned, Ecuador is tiny compared to its siblings, Colombia and Peru. Still, its geographical location and geology have helped it develop a varied range of ecosystems home to some unique species.

But why is Ecuador so biodiverse?

As we mentioned in our previous article, called Is Ecuador equally megadiverse as the US, with less than 3% of its size?, the Andean mountains functioned as a natural barrier that has kept the fauna in the different regions and at different altitudinal levels, helping the country to develop high levels of endemism. Indeed, Ecuador has the same quantity of Biosphere Reserves as massive Brazil, 7 in total. That’s why Ecuador is an important birding destination worldwide. 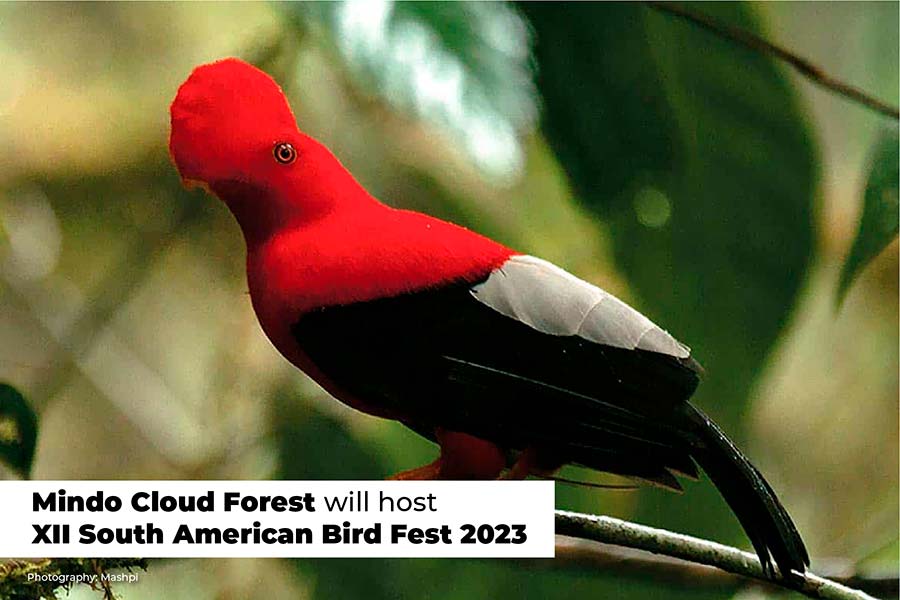 The South American Bird Fest is the continent’s most major event of its sort, and it is hosted in a new country each year. In 2022, Cuzco, Peru, hosted this important event.

During the fair, attendants can do birdwatching in various ecosystems (depending on the host country), do workshops with experts from around the world, and visit many stands while attending the talks, forums, and symposiums.

But why will Mindo be the epicenter of birding in 2023?

Mindo is in the heart of the Andean Chocó, a UNESCO Biosphere Reserve. Mindo’s warm climate hosts around 500 bird species and a rich biodiversity, including a wide variety of butterflies.

Moreover, Mindo is a few hours away from Quito, which makes international connectivity easy for travelers arriving for the event or discovering Ecuador’s mainland. On the other hand, some species that birdwatchers can spot in Mindo are Cock-of-the-Rock, Chestnut-Mandible Toucan, Toucan Barbet, Giant Antpitta, Scaled Fruiteater, Club-Winged Manakin, and Torrent Duck, among others.

What’s the alternative to safeguard the habitats of threatened birds? 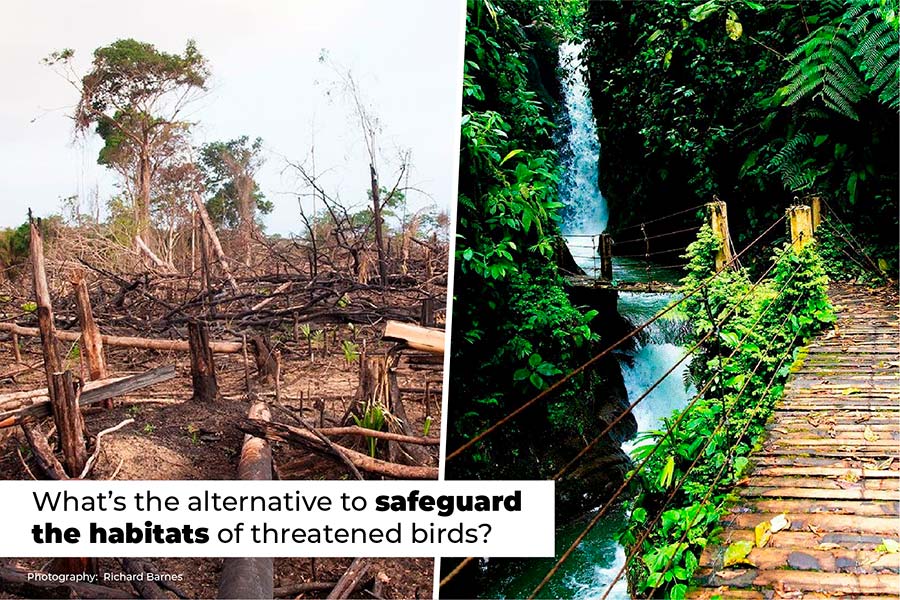 Aside from hunting and animal trafficking, birds, and other fauna species, face the threat of losing their habitat. Why? Because of the high levels of deforestation to convert forest into pastures for cattle, mining, or logging.

Did you know that Ecuador has lost around 2 million hectares (7,4% of its land surface) in a bit less than three decades, according to the FAO?

To safeguard biodiversity, Ecuador has established a national protected area network that covers more than 19% of its territory. In addition, there are also private reserves that protect the habitat of important species and also complement the governmental network. One example is Fundación de Conservación Jocotoco which protects over 30,000 hectares (over 74,000 acres) through its fifteen reserves across the four regions of Ecuador, including the Galapagos Islands.

But there are many other private reserves, such as Bellavista Cloud Forest or the Neblina reserve; both have become part of the National System of Protected Areas (SNAP in Spanish).

Besides protecting the land, birding, ecotourism, and nature tourism have been valuable assets to support the socio-economic development of local communities that were used to focus on diminishing practices like agriculture or mining.

Which are some of Ecuador’s coveted bird species that can catch the eyes of birdwatchers?

Up to this point, you may have an overview of Ecuador as a birding destination, but which are some of the bird species that birdwatchers can see here?

We prepared a short list of some of the most coveted species of Ecuador: 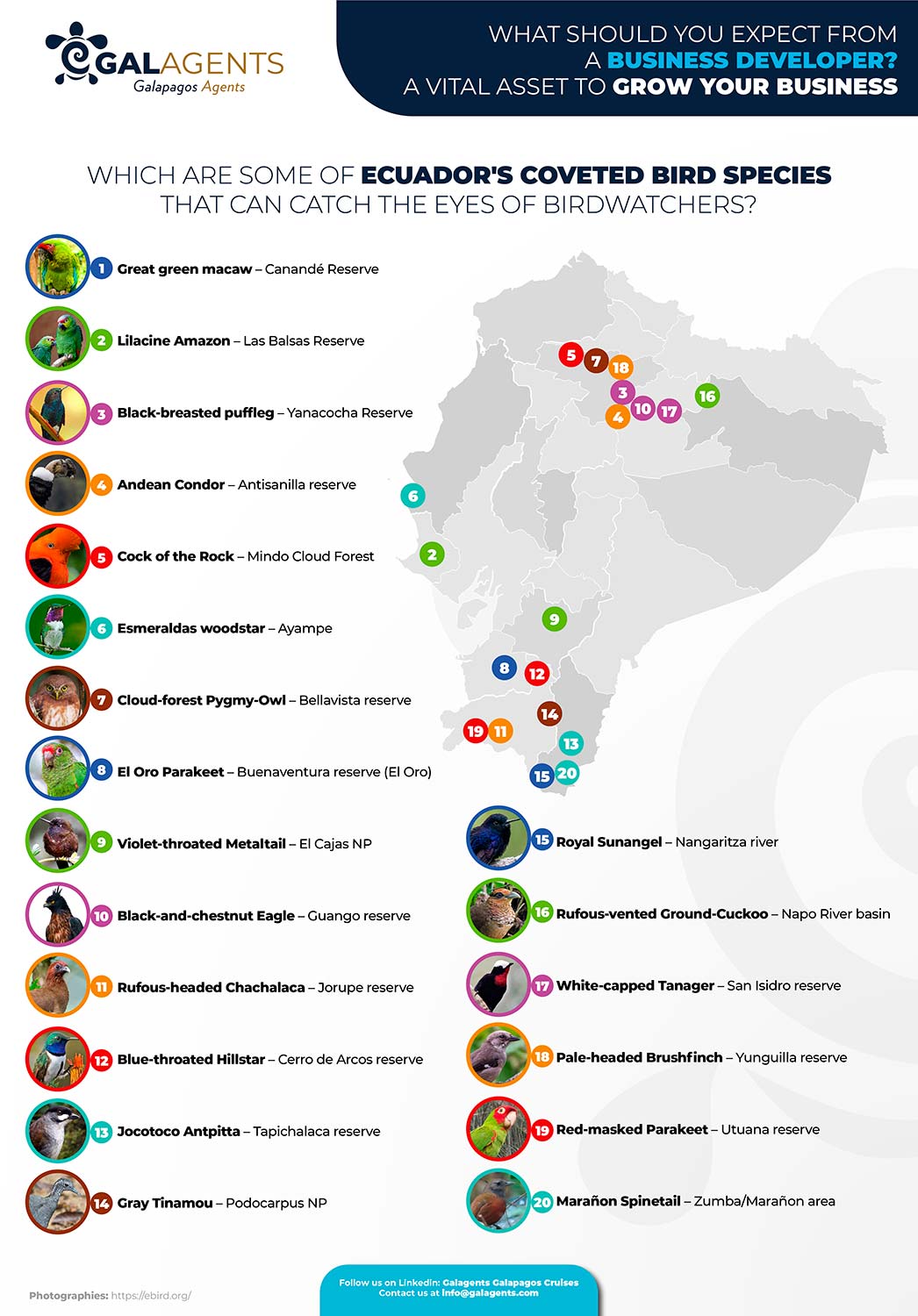 This is only a small selection of the 1,722 bird species Ecuador has, but as you can see, the country has a wide range of species that can mesmerize avid and amateur birdwatchers. The excellent part is that either within the reserves or nearby, travelers can enjoy Ecuadorian hospitality, culture, and way of life while supporting local economies and conservation efforts.

If you would like us to talk more about specific regions ideal for birdwatchers or specific species, let us know in the comments.

About the Author: Dennis Nunes