November 2 is the Day of the Dead, and Ecuador celebrates it deliciously with the traditional “Colada Morada” and “Guaguas de Pan.” But this tradition comes from around 500 years ago when the Incas established in Ecuador and celebrated the Aya Marcay Quilla, which we can translate as “the month of raising the dead.” In the Inca calendar, this celebration coincided with November, the month of the dead, when the sowing was finished, and the land was ready for the new harvest. Because of that, the Incas performed various rituals.

One of those rituals consisted of removing the deceased from their vaults, feeding and drinking with them, dressing them in their best clothes, putting feathers on their heads, singing to them, and dancing with them. It was a joyous day because it was the time when souls returned.

After colonialism, indigenous people adapted their religious celebration of Aya Marcay Quilla with the Catholic celebration of November 2 corresponding to the Day of the Dead. They prepared “uchucuta” for this celebration, a drink made from black corn mixed with water of medicinal herbs, potatoes, beans, peas, cabbage, and achiote. They accompanied this beverage with pumpkin tortillas, honey, and beeswax. With time, this indigenous tradition was mixing with the Spanish ones, deriving in this gastronomy of the deceased, the result of Indian and Spanish syncretism. 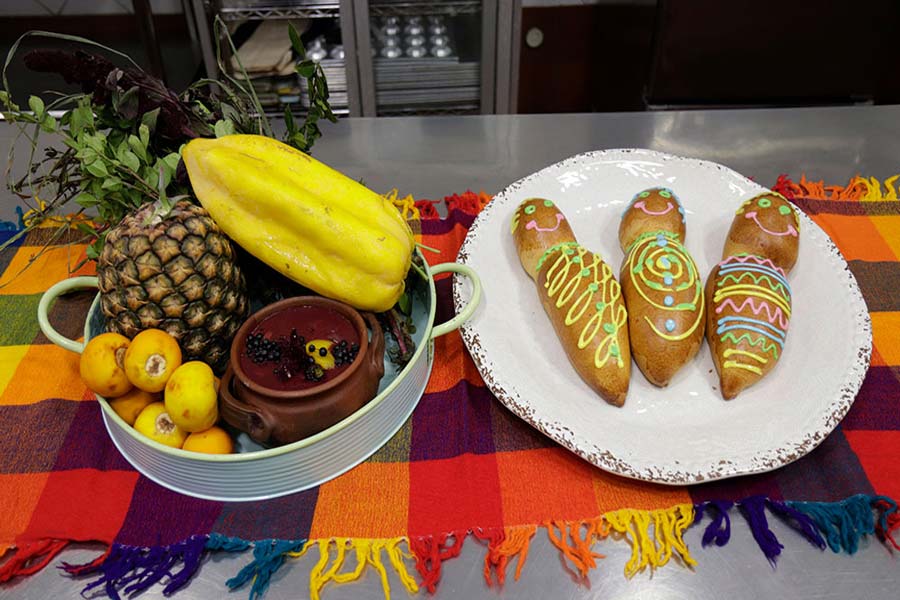 Today, the beverage recipe has changed, and both the drink and its companion are prepared differently. The “uchucuta” is now the “colada morada,” which is still made with black or purple corn as a base, but this time ground and turned into flour. Then, it is mixed with an infusion of herbs, blackberry, mortiño (Andean blueberry), naranjilla, and chopped fruits such as strawberries and pineapple. This drink is served by the side of “guaguas de pan,” figures made of wheat flour in the shape of little kids, decorated with smiling, colorful faces. They are usually filled with sweet delicacies such as guava jams, dulce de leche, and even chocolate.

The guaguas de pan appeared in the mid-nineteenth century and was very different from those we know today. At that time, it was called “Pan de Muerto” or “Pan de Finados”. They were not sweet nor decorated with colors either. The decoration used to be the soot from the wood oven because it was a mourning figure made with pork fat, butter, and eggs. In its origins, they did not represent a child but the deceased shrouded. As families could no longer remove their relatives from the graves, this bread figurine symbolized the dead families visited at the cemeteries. It was during the 80s when the “guaguas” started to become sweet.

However, the recipe for the “colada morada” varies by region and family. It is a family tradition to prepare it, and each one has its recipe, which they usually claim is the best one and passed down from generation to generation. That’s why every family made their colada morada with the “original ancient recipe.”

In terms of customs, in the Andes, families take the food the deceased loved the most to his grave in the cemetery and share it with the family there. They bring not only colada and guaguas but also corn, potatoes, and meat. 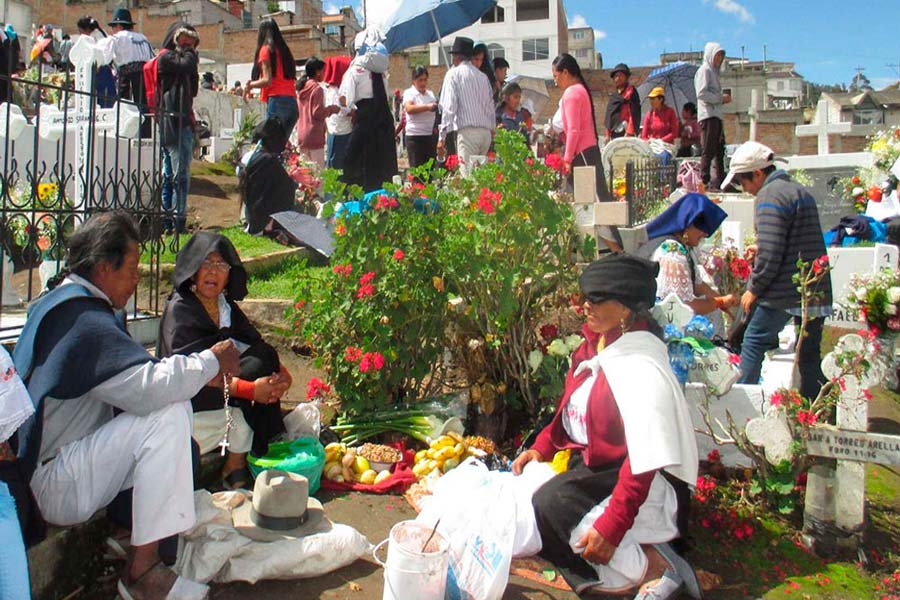 On the other hand, on the coast, in the Manabí and Santa Elena areas, family tables are usually decorated with the deceased’s favorite food. But those tables are not touched during the day, yet relatives eat together in another part of the house. In this region, people with deceased children prepare a separate table for the kids on November 1st by adding their favorite dishes and toys and placing the table in the corner.

The celebration of the Day of the Dead is a very ancient Ecuadorian tradition that has been kept alive until today. Every October, the smell of the colada morada begins to take the streets and family houses.

That’s why we can say the Day of the Dead in Ecuador is a sweet and tasty tradition full of history!