Discover 7 of the unique Galapagos plants that welcome you

Many have been said about the uniqueness of the Galapagos Islands, its wildlife, and the fragility of ecosystems. You may know about giant tortoises, sharks, sea lions, and more. Yet, how much do you know about its plant species? Those that catch your attention as soon as you land into the archipelago. Hence, it’s time to unveil them in the following article.

The Galapagos Islands have been blessed by the convergence of cold and warm currents, resulting in characteristic climates and geology, as we’ve mentioned in several articles, like this one. 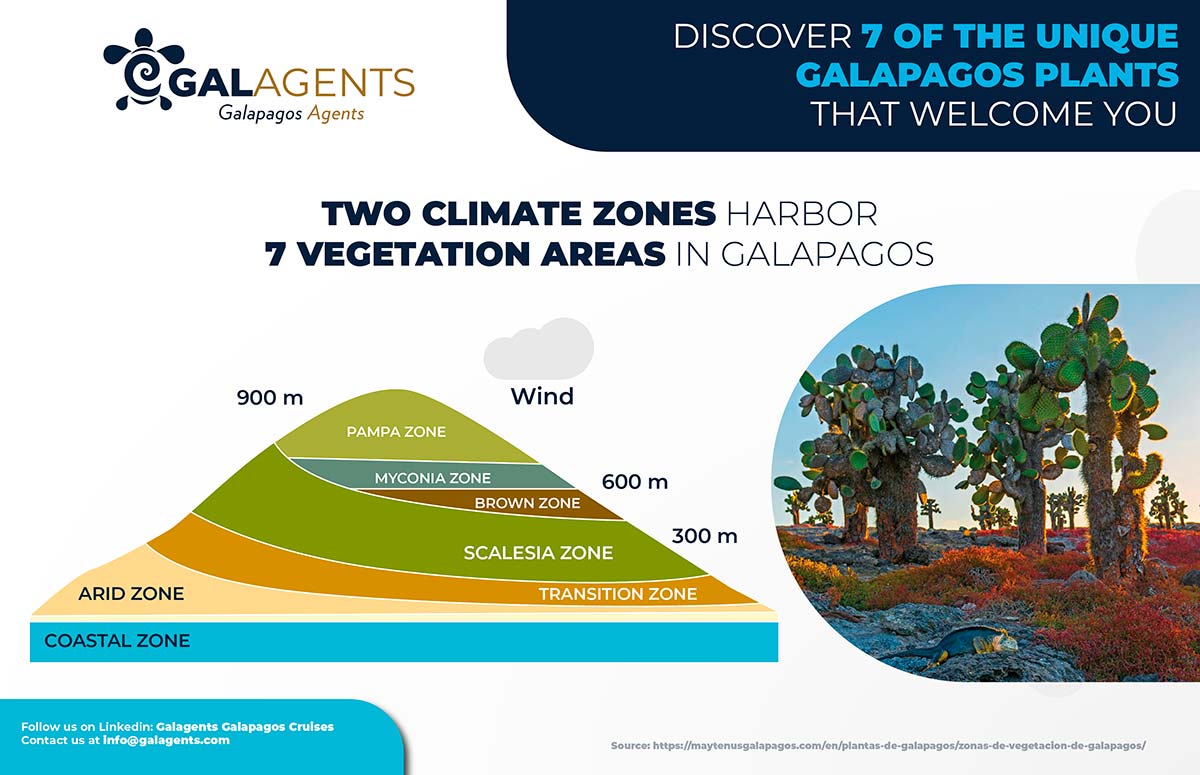 This peculiar geology and climate have influenced plant species within the archipelago, of which 560 are native, 180 are endemics, and 700 other species are introduced. In terms of vegetation groups, the islands have seven zones:

The isolation that nurtured natives and endemic plant species

It’s not surprising that plant species also had to adapt to Galapagos’ harsh conditions to survive.

That’s why the Galapagos ecosystems are fragile and highly affected by human intervention. Hence, the Galapagos National Park controls human activities such as agriculture and livestock to avoid the destruction of fragile dry and semi-humid forests for human exploitation or over-exploitation of forestalled resources.

Unfortunately, people throughout the years have introduced some invasive plants that have become a threat to the local and fragile ones.

Did you know that wild blackberries grow in the wilderness and threaten the survival of the Galapagos Petrel?

Yes indeed! This invasive plant has thicker branches that grow close to the ground and, unfortunately, shut down the entrance of the underground nest of the Galapagos Petrel, one of the Galapagos endemic species that breed in the same nest for years.

A sneak peek of the Galapagos endemic and native plant species

As you’ve seen, too many species belong and can be found only in the Galapagos archipelago. Yet, we intend to let you know some of the most important and highly visible for any travelers during their trip throughout the Galapagos.

1.- The Giant Daisy Tree of the Galapagos evolved from a small herbaceous plant to tall trees

In the highlands of Santa Cruz, San Cristobal, Floreana, or Santiago, you may see a type of tree that surprisingly comes from the same family (Asteraceae) of sunflowers, lettuce, and daisies. That type of tree is the Scalesia that, due to evolution, became tall trees (5-12 m / 16-39 ft).

Unfortunately, people used to deforest the Scaleasia forests, before the declaration of National Park, for agricultural and livestock purposes, and these types of trees are hard to reproduce.

This is a purplish shrub that grows in the highlands and humid areas of the Galapagos Islands. Indeed, it has its own zone where this plant is dominant, and above the Scalesia zone. Unfortunately, the endemic Galapagos Miconia is Endangered due to the loss of its forest due to invasive guava and quinine trees.

Funny fact: The Galapagos has its endemic guava tree that measures around 8 m (26 ft) and grows in rocky soil.

3.- The impressive Lava Cactus that blooms at the dawning

A pioneering species that was the first to colonize lava fields. This small lava cactus is endemic to Bartolome Island and is the smallest in the archipelago.

They are yellow, and as soon as they become older, they turn brownish up to becoming grey. Its flower is white, but unfortunately for travelers, it only blooms at dawning.

4.- The “Holy Stick” welcomes you to Santa Cruz highlands.

You will begin your journey throughout Santa Cruz Island as soon as you land at Baltra Airport and cross the Itabaca Channel. The first thing that will catch your attention is the forest of the incense tree called Palo Santo (Holy Stick).

This plant species is native to South America, classified as Vulnerable by the IUCN, and they will give you a clue about in which season you are. How so? Well, this particular tree is primarily dry but turns green during the rainy season (December-June). So, if you see a green forest, it’s an indication that you will have a bit of tropical weather with warmer and humid days, some daily rains, and cloudier skies.

One of the plant species you can find in the Galapagos Islands is the Prickly Pear Cactus or Opuntia, with five variations available in the archipelago throughout Santa Cruz, Isabela, Santa Fe Islands, and 15 islets. One of them is the tallest cactus species that pushed giant tortoises to long their neck to reach the fruit at the top of the cactus.

7.- The exotism of Galapagos orchids

Ecuador is considered the pinnacle for orchids worldwide, so it’s not strange that the Galapagos Islands have some orchids. It’s not as rich as Ecuador’s mainland, but it has some amazing orchids.

One of them is the endemic and Vulnerable Buttonhole Orchid. On various trees, this species can be found on six islands, mainly in humid areas, such as the Scalesia forests. The other is the Fringed Orchid, a native species identified in Santa Cruz, Santiago, and Isabela Islands. Yet, recently Mongabay Latam reported that after its last record 40 years ago, a possible individual of this species was found on San Cristobal Island. This island didn’t have any history of it.

As you’ve read throughout this short article, the Galapagos Island is also remarkable in plant species that have made this remote archipelago a jewel for plant lovers or anyone that wants to see first-hand the evolution tangible in the earth.

About the Author: Dennis Nunes