8 Iconic Galapagos Wildlife Species: Facts and tips for not missing them

In previous articles, we have mentioned that the Galapagos Islands’ jewel is its wildlife. Many species inhabit only this remote archipelago in the Pacific Ocean. Meeting them is having a close encounter with those marvelous and rare animals that helped Charles Darwin develop his Theory of Evolution.

But do you know the facts and tips to not miss them when traveling to the Galapagos?

If you don’t know or want to use this article as a cheat sheet, keep reading and save the infographics.

This bird species represents the evolution that Darwin mentioned in his theory. Worldwide there are 29 types of cormorants, but the Galapagos cormorant is the only flightless.

Because they are confined to the lava shoreline and beaches of the western side of Isabela and Fernandina, they evolved until they stunted their wings to be able to swim instead of flying to feed. Their diet is mainly based on eels and octopuses, so they must swim deep into the sea floor.

They are known as the Galapagos dinosaurs due to their prehistoric look formed by the salt stick on their face when they sneeze the excess salt from their body. They are another example of the Galapagos’ evolution because they evolved to the harsh conditions of the archipelago. They use their tail for swimming and then feed from algae underwater. Watching them use their cloves to stick to an underwater rock while eating the algae is impressive.

After swimming, they need to recover their body temperature, which drops down with the cold waters of the Galapagos. That’s why it is easy to spot them on the shoreline, resting and sunbathing.

It is the only tropical penguin and the second smallest in the world. They are locally known as “torpedoes” because of their swimming agility and speed.

As it happens in Antarctica, penguins are monogamous and mate for life with their female. They are highly affected by the warming of the seas, or the El Niño phenomenon, due to climate change because warmer water obstructs them from feeding and breeding.

The most representative species of the Galapagos Islands with an average life span of more than a hundred years and more than 15 variations that differentiate among them through their carapace.

They are the most adorable and representative species of the Galapagos Islands. They catch the attention of travelers either when they are sleeping on a street or pier bench or when they swim among you while snorkeling or sunbathing at the beach.

Another iconic bird species, not only for its impressive size but also for its funny courtship ritual.

They live only on Española Island on the southeast side of the archipelago between San Cristobal and Floreana Islands.

These funny bird species catch the attention of travelers, mainly the blue and red-footed boobies, for their clumsy way of waking and mating rituals.

Punta Pitt, in San Cristobal, is the only site to watch the blue-footed, red-footed, and Nazca boobies, accessible either by cruises (eastern journeys) or day tours.

So, let’s talk briefly about the most wanted ones.

Its bright blue feet distinguish them from its cousins. Even though they can be found in other sites aside from the Galapagos archipelago, they are one of the symbols of the Enchanted Islands. 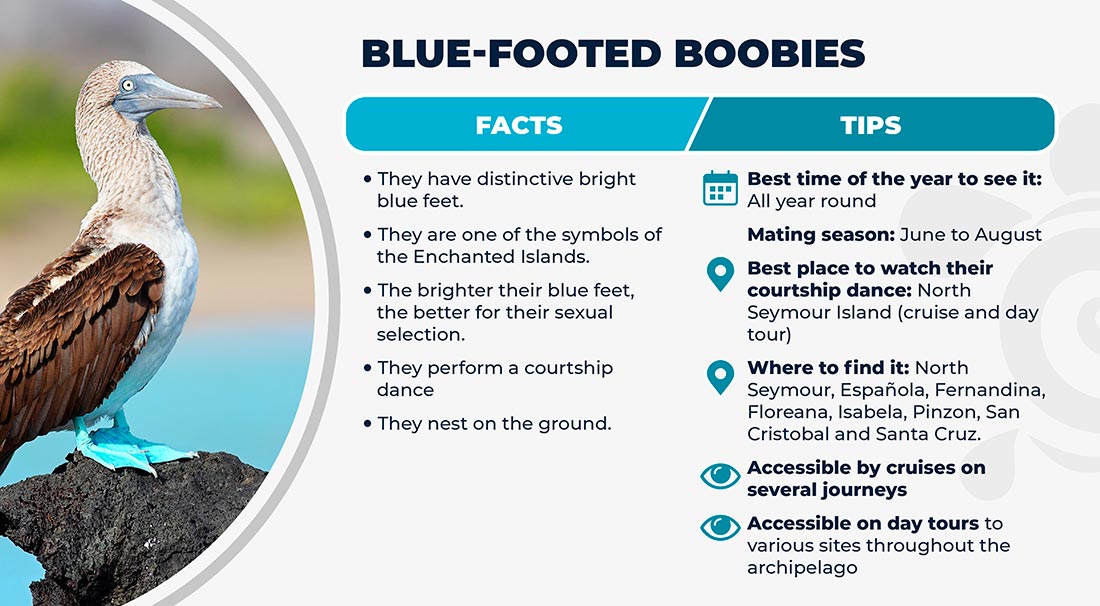 The brighter their blue feet, the better for their sexual selection. They also perform a funny courtship ritual. They nest on the ground, so travelers need to be aware of that when walking through the path across the islands.

This is the smallest one of its types, and its bright red feet and blue beak differentiate them from its cousins.

They nest on the top of small shrubs and coastal trees, laying only one egg every 15 months. And they can fly more than 90 miles (145 km) for feeding.

Many more species make the Galapagos Islands a vast natural zoo where species are king and humans are their minions. These are just a small selection of the Galapagos wildlife, but they are undoubtedly some of the most iconic travelers want when visiting the Enchanted Islands.

And, if you want us to talk more about diving iconic species, let us know in the comment box.

About the Author: Lenin Hernandez